What are NOS parts?

NOS parts are most commonly defined as New Old Stock parts. You may also see them referred to as  New Obsolete Stock and New Original Stock occasionally. These parts may have been  manufactured years or even decades ago and have been sitting on a shelf , or perhaps stored in a basement or dealer's attic  unsold all these years.  NOS parts have never been installed on a vehicle.  Many parts still come in the original packaging but it is not unusual for the packaging to be discolored, marked ,damaged or just plain missing all together. The parts themselves may have undergone some cosmetic changes such as deterioration of paint or plated surfaces, yellowing of plastics, or fading from age or exposure to sunlight ,cold or heat. None of which will affect the functioning of the part.

Items we describe as NOS are parts which were originally supplied through the original car  manufacturers parts division or another division of the parent corporation . An example would be General Motors who supplied parts through the dealership parts departments and through the aftermarket parts stores under the Delco Remy, AC , Rochester and New Departure labels. Ford had Autolite and Motorcraft . In many cases the parts were exactly the same, in some cases they were not. It is important to remember that just because a part is NOS it does not mean it is exactly the same as the part that was installed when a car was built.  Many manufacturers made changes to parts over the years while the parts were in production. This was done for a variety of reasons. The most common case was to redesign a part so as to combine several model or year applications  together. The manufacturer redesigned the part  to fit several earlier years thus allowing the parts department  to carry one part to fit several years instead of having to stock several parts , one part for each year.  The changes could be as subtle as adding a mounting hole to allow it to fit several years or as major as a total redesign that looked nothing like the original.  Remember the manufacturer only cared that it functioned correctly. Visual differences did not matter.  You will sometimes see these later parts called Service replacement parts . They function perfectly as original and are from the original manufacturer but are different visually. Other common reasons for parts design changes were a change of the supplier of the part, redesign for durability or safety and of course reduction in cost.

What is an OEM part ?

What is a NORS part ?

NORS  New Old Replacement stock are aftermarket parts that were manufactured years to decades ago for sale through the corner parts store, gas station or garage. These were made by various manufacturers not associated with  the car manufacturer in any way. In many cases these parts were superior in quality to what the manufacturer originally installed but most likely will not appear visually the same as the original. NORS parts are an excellent choice for casual restorers or daily driver owners . Most of the NORS parts we sell were made in the USA  not Taiwan or China like most current reproductions, although some parts were made in japan back in the 50's to 70's.  Some Common NORS manufacturers you may see are Mcquay Norris, MOOG, Master ,Elgin , TRW, Standard ignition,fram, Preferred, and Guaranteed to name a few.

Do you sell rebuilt parts?

Some parts may be offered as rebuilt or remanufactured units. These have been re-machined to original specifications or have had components or parts that wear out replaced. Some items we sell as rebuilt are carburetors, water pumps, starter drives and brake master cylinders. These have been purchased from parts store inventories and may have been rebuilt up to several decades ago by various rebuilders throughout the USA.

An overlooked  benefit of using a rebuilt unit is that the original casting or core  may have been used with correct dates and casting numbers for your car. This is not always the case. We list details and  these numbers if applicable.

What is a superseded part ?

Many times when a part application was combined with another or replaced in service the manufacturer changed the part number. the earlier number is said to have been superseded by the later. In some cases that number itself may be superceded later by another. This is why you may see several different part numbers for the same part in a listing including part numbers for the same part if sold by another division of the company.  An example would be a GM part and Delco part . We may list both numbers if applicable.

Are any of the parts used that you sell ??

Most parts we sell are new never installed parts but we do sell used parts like Radios and steering columns.   Occasionally we may offer " dealer take offs" or an  impossible to find item that is used  . All used parts are clearly marked in the listings.

Are the parts you sell perfect?

Many folks inquire if a part is "perfect" .  It is important to remember that the manufacturer was mass producing a commodity not a piece of art.  Minor flaws and imperfections are common and expected.  What this means is that production line quality of nos parts may not meet the expectations of a restorer who is seeking perfection. These are not newly manufactured parts but parts that may be up to several decades old.  It is common for paint finishes or Silk Screening to be applied unevenly , with runs or smudges. Cadmium and black oxide finishes may be discolored from age. Surfaces may show shelf wear, scratches or blemishes from years of rubbing and bumping other parts in the bins and on the shelves. Many of these parts were tossed in an attic or basement after they left current parts status and were subject to lots of abuse. On most mechanical parts this will not affect function at all.

How do you determine what Vehicle a part fits?

We use the manufacturer's original application books to determine what vehicle the parts fit.

Do you Test the parts?

We make every effort to check the parts visually for flaws and damage beyond what is expected for the age of the part and make note of any problems in the listings .  We do not test any of the items prior to sale.

What if I am not satisfied with my purchase?

You can return any part (except electrical parts and final sale items)  you are not satisfied with as long as you have not installed it, modified or damaged it in any way. Please see our warranty and returns policy for complete details. 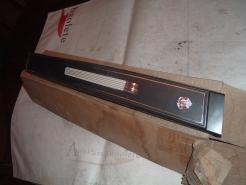